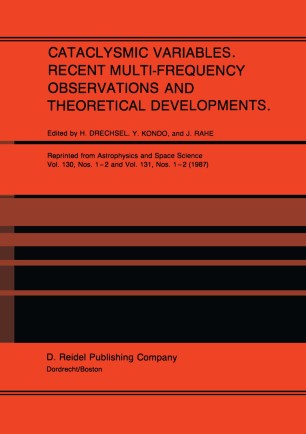 Recent advances in observational and theoretical efforts in understanding the nature of cataclysmic variables had reached such maturity that there existed a strong, shared feeling among the workers in this field that an international colloquium sponsored by the International Astronomical Union would be timely. To be more specific, this was due primarily to the accumulation of the new data from satellite observatories, such as the International Ultraviolet Observatory (IUE) and EXOSAT, as well as ground-based optical and radio telescopes, and the advances in modeling the putative accretion disks and the thermo-nuclear run-away phenomena in the vinicity of the white dwarf stars in cataclysmic variables. A series of workshops on this subject held in North America over the past several years and that held in Europe in 1985 had all contributed to the advances in our knowledge that led to IAU Colloguium No. 93, held in Bamberg from the 16th to 19th of June 1986. In all, 157 astronomers from 27 countries participated in this conference. Judging from the papers presented, both invited and contributed, and from the enthusiasm seen in discussions, the meeting was indeed a success.