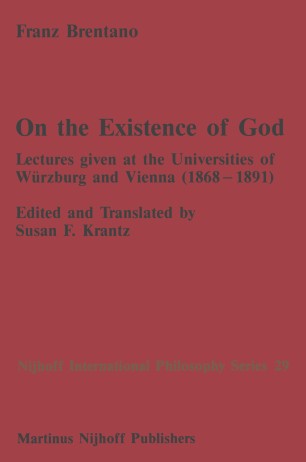 On the Existence of God

Lectures given at the Universities of Würzburg and Vienna (1868–1891)

Of the works by Franz Brentano (1838-1917) which have appeared in thus far, perhaps none is better suited to convey a clear idea of the English spirit of the man that this volume of his lectures on proving the existence of God. In order to understand his metaphysics, it would he better to read The Theory of Categories; in order to master the finer points of his psychology, it would be better to read Psychology From an Empirical Standpoint; in order to appreciate his ethical theory, it would be better to read The Origin of Our Knowledge of Right and Wrong or, for a more thorough treatment, The Foundation and Construction of Ethics. But in order to see what it was that gave Brentano the enthusiasm and dedication to do all that work and much more besides, it is necessary to find out what Brentano believed the philosophical enterprise itself to be; and this comes forth most vividly when he bends his philosophical efforts to the subject he considered most important of all, namely, natural theology. For, like Socrates, Brentano brought a kind of religious fervor to his philosophy precisely because he saw it as dealing much better than religion does with the matters that are closest to our hearts.