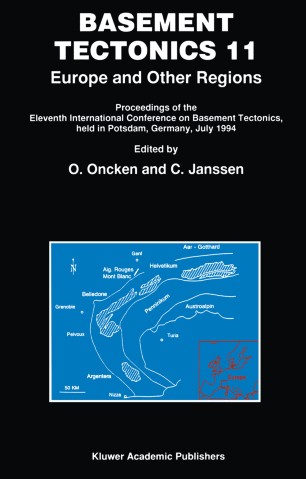 Basement Tectonics 11 Europe and Other Regions

Part of the Proceedings of the International Conferences on Basement Tectonics book series (ICBT, volume 5)

The Eleventh International Conference on Basement Tectonics was held at the GeoForschungsZentrum Potsdam in Germany 25-29 July 1994. It was the first time that a meeting of this series took place in the centre of Europe and the first such meeting in this area after the recent political changes in eastern Europe. Consequently, the main theme of the meeting focussed on the structure and history of the entire European continent. Further themes were grouped around topics of current interest. Keynote lectures on these topics were given by A. Berthelsen, St. Mueller, A. Green, and D. Fountain. The technical sessions were arranged with support of the Scientific Committee on the following topics: 1. Continental scale features of basement rocks of phanerozoic cratons - with emphasis on Europe 2. Extrapolation and correlation of geological and geophysical data from basement rocks: an assessment 3. Mechanisms of basement exhumation in the evolution of orogenic belts 4. Structure and intraplate deformation of the North-American craton Papers submitted to this volume have however all been collected in one part since all of them deal with different aspects of deformation of the continental basement. A second part contains a complete list of all papers and posters presented at the meeting. Field trips to study some of the above mentioned aspects in the Harz mountains, the Granulite Massif, and the Erzgebirge were organized by P. Bankwitz, P. Frischbutter, 1. Rotzler, K. Rotzler, and B. Mingram. Their assistance is gratefully acknowledged.