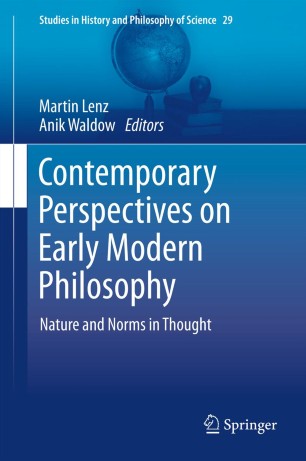 Nature and Norms in Thought

Part of the Studies in History and Philosophy of Science book series (AUST, volume 29)

Normativity has long been conceived as more properly pertaining to the domain of thought than to the domain of nature. This conception goes back to Kant and still figures prominently in contemporary epistemology, philosophy of mind and ethics. By offering a collection of new essays by leading scholars in early modern philosophy and specialists in contemporary philosophy, this volume goes beyond the point where nature and normativity came apart, and challenges the well-established opposition between these all too neatly separated realms. It examines how the mind’s embeddedness in nature can be conceived as a starting point for uncovering the links between naturally and conventionally determined standards governing an agent’s epistemic and moral engagement with the world. The original essays are grouped in two parts. The first part focuses on specific aspects of theories of perception, thought formation and judgment. It gestures towards an account of normativity that regards linguistic conventions and natural constraints as jointly setting the scene for the mind’s ability to conceptualise its experiences. The second part of the book asks what the norms of desirable epistemic and moral practices are. Key to this approach is an examination of human beings as parts of nature, who act as natural causes and are determined by their sensibilities and sentiments. Each part concludes with a chapter that integrates features of the historical debate into the contemporary context.​