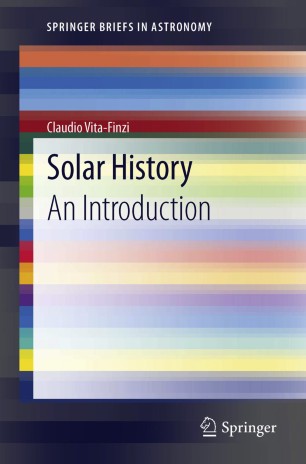 Beyond the four centuries of sunspot observation and the five decades during which artificial satellites have monitored the Sun – that is to say for 99.99999% of the Sun’s existence – our knowledge of solar history depends largely on analogy with kindred main sequence stars, on the outcome of various kinds of modelling, and on indirect measures of solar activity. They include the analysis of lunar rocks and meteorites for evidence of solar flares and other components of the solar cosmic-ray (SCR) flux, and the measurement of cosmogenic isotopes in wood, stratified ice and marine sediments to evaluate changes in the galactic cosmic-ray (GCR) flux and thus infer changes in the sheltering magnetic fields of the solar wind. In addition, shifts in the global atmospheric circulation which appear to result from cyclic fluctuations in solar irradiance have left their mark in river sediments and in the isotopic composition of cave deposits. In this volume the results these sources have already produced have been summarised, paying special attention to those that reflect processes in different parts of the Sun’s interior and that display periodicities and trends which may enable us to forecast future large-scale environmental changes.