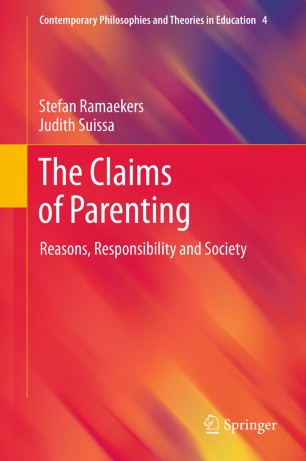 The Claims of Parenting

Part of the Contemporary Philosophies and Theories in Education book series (COPT, volume 4)

Many sociological, historical and cultural stories can be and have already been told about why it is that parents in post-industrial, western societies face an often overwhelming array of advice on how to bring up their children. At the same time, there have been several philosophical treatments of the legal, moral and political issues surrounding issues of procreation, the rights of children and the duties of parents, as well as some philosophical accounts of the shifts in our underlying conceptualization of childhood and adult-child relationships. While this book partly builds on the insights of this literature, it is significantly different in that it offers a philosophically-informed discussion of the actual practical experience of being a parent, with its deliberations, judgements and dilemmas. In probing the ethical and conceptual questions suggested by the  parent-child relationship, this unique volume demonstrates the irreducible philosophical richness of this relationship and thus provides an important counter-balance to the overly empirical and largely psychological focus of a great deal of “parenting” literature. Unlike other analytic work on the parent-child relationship and the educational role of parents, this work draws on first-person accounts of the day-to-day experience of being a parent in order to explore the ethical and epistemological aspects of this experience. In so doing it exposes the limitations of some of the languages within which contemporary “parenting” is conceptualized and discussed, and opens up a space for thinking about childrearing and the parent-child relationship beyond and other than in terms of the languages which dominate the ways in which we generally think about it today.