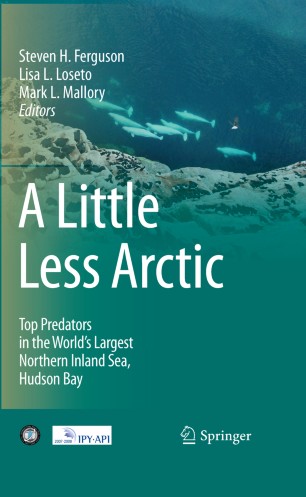 In Arctic Canada, Hudson Bay is a site of great exploration history, aboriginal culture, and a vast marine wilderness supporting large populations of marine mammals and birds. These include some of the most iconic Arctic animals like beluga, narwhal, bowhead whales, and polar bears. Due to the challenges of conducting field research in this region, some of the mysteries of where these animals move, and how they are able to survive in such seemingly inhospitable, ice-choked habitats are just now being unlocked. For example, are polar bears being replaced by killer whales? This new information could not be more salient, as the Hudson Bay Region is undergoing rapid environmental change due to global warming, as well as increased pressures from industrial development interests. A Little Less Arctic brings together some of the world’s leading Arctic scientists to present the current state of knowledge on the physical and biological characteristics of Hudson Bay and in particular the ecology of marine wildlife to highlight what information is required to better understand and adapt to the changes underway, and to forecast what will happen to marine wildlife of this vast inland sea in the future.