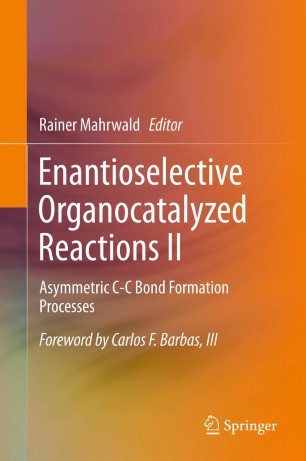 Organocatalysis has emerged as one of the hot topics in organic chemistry in recent years, as confirmed by the rapid-growing interest that researchers have shown in this field.
Enantioselective Organocatalyzed Reaction Volume I and II provides a critical review of the state-of-the-art developments in Organocatalysis, with a special focus on the asymmetric transformation that it enables. These volumes, written by leading experts in the field, discuss a broad range of synthetic transformations and offer an up-to-date coverage of organocatalyzed reactions such as:

By presenting a complete panorama of the use of organocatalysts in organic reaction, Enantioselective Organocatalyzed Reaction will help the global audience of scientists engaged in this area of research to develop new catalysts as well as new fields of applications in organic synthesis.

Dr. Rainer Mahrwald was born in 1950. He studied chemistry at MLU Halle and subsequently joined the „Manfred von Ardenne“ Research Institute in Dresden, where he led the synthetics group. He gained his doctorate under G. Wagner in Leipzig in 1979, and went on to the Institute of Organic Chemistry at the Academy of Science in Berlin, where he remained until 1990. Following a stay at the Philipps-University in Marburg, Dr. Mahrwald qualified as a lecturer at the Humboldt University Berlin, where he is now a lecturer.

“Under Rainer Mahrwald’s guidance, the authors have gathered together hundreds of reactions, documented a wide variety of catalysts, and provided clear descriptions and schemes to illustrate the underlying mechanisms. … all of the chapters are crafted to inspire many new ideas and suggestions for the reader’s own work. … is well worthwhile for large research groups and libraries.” (Organic Chemistry Portal, March, 2012)
Buy options