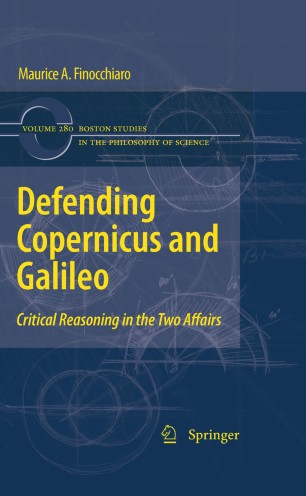 Critical Reasoning in the Two Affairs

Part of the Boston Studies in the Philosophy of Science book series (BSPS, volume 280)

Although recent works on Galileo’s trial have reached new heights of erudition, documentation, and sophistication, they often exhibit inflated complexities, neglect 400 years of historiography, or make little effort to learn from Galileo. This book strives to avoid such lacunae by judiciously comparing and contrasting the two Galileo affairs, that is, the original controversy over the earth’s motion ending with his condemnation by the Inquisition in 1633, and the subsequent controversy over the rightness of that condemnation continuing to our day. The book argues that the Copernican Revolution required that the hypothesis of the earth’s motion be not only constructively supported with new reasons and evidence, but also critically defended from numerous old and new objections. This defense in turn required not only the destructive refutation, but also the appreciative understanding of those objections in all their strength. A major Galilean accomplishment was to elaborate such a reasoned, critical, and fair-minded defense of Copernicanism. Galileo’s trial can be interpreted as a series of ecclesiastic attempts to stop him from so defending Copernicus. And an essential thread of the subsequent controversy has been the emergence of many arguments claiming that his condemnation was right, as well as defenses of Galileo from such criticisms. The book’s particular yet overarching thesis is that today the proper defense of Galileo can and should have the reasoned, critical, and fair-minded character which his own defense of Copernicus had.