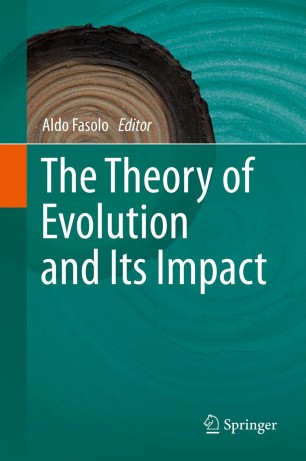 The Theory of Evolution and Its Impact

Year 2009 was the triumph of Darwin as a global superstar, spinning from the pop icon to the actual understanding to what make him a great innovator, able to give a turn to whole modern culture. Does all this activity mean evolution has lost its ability to excite fear and opposition? After such a deluge of books, conferences, reviews, gadgets, what is today our  vision on theory of Evolution and its Impact? These are the questions asked at an inter-academy conference held in Torino (May 27-29, 2010) among the Accademia delle Scienze di Torino, the Accademia Nazionale dei Lincei and the Berlin-Brandenburgische Akademie der Wissenschaften.  The present book collects the contributions from the meeting, mixing styles, arguments, topics, history and philosophy of science, modern biology and epistemology . This kind of inter-disciplinary approach may appear erratic, but it conveys flashes of lights on the changing scene where the theory of evolution plays. This is in line with the idea to reopen the file of the Two Cultures, looking at shared problems, which are not yet really the Third Culture invoked by Charles Percy Snow half a century ago, but they can foster it, at least in such a pivotal domain as evolution. According to the philosopher Michael Ruse, the conclusion is “that in fifty years or a hundred years we will still have the theory of the Origin around. Great, precisely because it does not stand still, but remakes itself and grows and changes by virtue of the fact that it gives such a terrific foundation. Is Darwinism past its sell-by date? Not by a long chalk yet!”