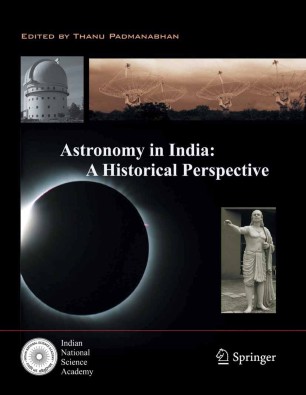 Astronomy in India: A Historical Perspective

India has a strong and ancient tradition of astronomy, which seamlessly merges with the current activities in Astronomy and Astrophysics in the country. While the younger generation of astronomers and students are reasonably familiar with the current facilities and the astronomical research, they might not have an equally good knowledge of the rich history of Indian astronomy. This particular volume, brought out as a part of the Platinum Jubilee Celebrations of Indian National Science Academy, concentrates on selected aspects of historical development of Indian astronomy in the form of six invited chapters. Two of the chapters – by Balachandra Rao and M.S. Sriram – cover ancient astronomy and the development of calculus in the ancient Kerela text Yuktibhasa. The other four chapters by B.V. Sreekantan, Siraj Hasan, Govind Swarup and Jayant Narlikar deal with the contemporary history of Indian astronomy covering space astronomy, optical astronomy, radio astronomy and developments in relativistic astrophysics. These chapters, written by experts in the field, provide an in-depth study of the subject and make this volume quite unique.