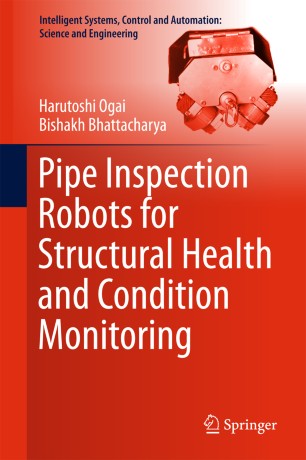 This book highlights the state-of-the-art with regard to inline pipe investigation and structural health monitoring of pipes. The book begins with applications of pipe inspection robots, and goes on to discuss. robots that are developed for a mobile platform, various sensors employed to sense defects, and different data storage/communication systems employed for damage prognosis. The book also introduces smart materials and smart sensors for use in pipe inspection robots. The contents of this book will be useful to researchers and professionals alike. The structure of the book enables its use as a text in professional training and development coursework.

Prof. Harutoshi Ogai holds a Doctorate in Engineering from the Tokyo Institute of Technology, Japan. He is currently a Professor at the Graduate School of Information, Product and Systems (IPS)-Waseda University, Japan. Before joining the IPS-Waseda, he had worked as one of the Chief Executives with Nippon Steel Company for over two decades, and had made seminal contributions to the field of Modeling and Optimal Control of Complex Systems like Blast Furnaces. His current research areas include: Complex Process Modeling and Control, Design and Development of Autonomous Electric Vehicles, Process Analysis and Simulation, Bridge Damage Diagnosis, and Automotive Control. He has successfully developed process modeling and Java-based process simulators for many large-scale complex processes and developed strategies for optimal control, chiefly using ICA (independent component analysis), LOM (large-scale data on-line modeling) and SOG (simulation-based on-line guidance). Prof. Ogai and his team have developed many such hardware-in-the-loop systems for various industrial applications.

Dr. Bishakh Bhattacharya is the Mehta Chair Professor, Department of Mechanical Engineering at the Indian Institute of Technology Kanpur (IIT Kanpur), India. Among other activities, he was the Head of the Design Programme from 2011-2013. He is currently coordinating the Space Technology Cell of the Institute. He is active in creating Web and Video based course materials for India’s National Program on Technology Enhanced Learning (NPTEL) initiative. He was a visiting professor at the University of Sheffield, where he carried out research on Structural Health Monitoring of Complex Autonomous Systems. He also visited IPS-Waseda University, Japan to jointly develop new Pipe Health Monitoring robots. His key areas of research include: Vibration Control, Structural Health Monitoring, Energy Harvesting System, Control–Structure Interaction, Intelligent System Design, and Child–Robot Interaction. Based on his work, a new technology is currently being developed for the shape control of continuous structures like space-born reconfigurable parabolic antenna systems for the Indian Space Research Organization (ISRO). Another notable application of his work is a new robot for Pipe Health Monitoring, developed for the Gas Authority of India Limited (GAIL). Professor Bhattacharya is a recipient of the Department of Science and Technology (DST) Young Scientist award and Young Scientist Award from the Systems Society of India. He has developed international collaborations with the UK, Sweden and Japan.