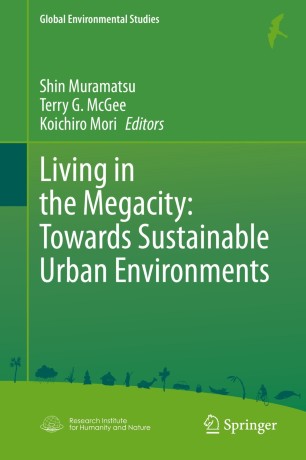 Living in the Megacity: Towards Sustainable Urban Environments

This book tackles the challenging issues raised by the growth of large megacities from diverse perspectives and approaches. The central question raised by the growth of megacities is what effect their growth will have on the ability of the global population to live in sustainable, livable, and safe societies. In Part I, important issues on the relationships between megacities and sustainability of the global environment are specified. Part II shows what can be learned from the history and diversity of megacities to solve challenging issues of the present. We present practical approaches that can solve the issues of megacities particularly focusing on human activities that seek the more harmonious relationship between life amenities and the natural environment: population density and urban built environment; production and trade; and environmental education and enlightenment. Part III aims to answer the question, what aspects of megacities should be measured and assessed? Barometers are necessary to control human activities in megacities. We consider how to measure and assess performances of megacities, reviewing some cases of indicators that authors have developed.

This publication highlights the challenging issues of the relationships between megacities and sustainability of the global environment and related issues that have accrued from them, based on the following three scales: long-term time scale from the past to the present and future; a vast spatial scale that links global space with local spaces; and the scale of various aspects of human socio-economic activities in megacities.

Emeritus Professor/Dr. Shin Muramatsu
He is an emeritus professor at the University of Tokyo (Japan). His research has mainly focused on the history of Chinese architecture. He has currently aimed to integrate architecture histories of East Asian countries. He was awarded Masayoshi Ohira Prize in 1999. He was a project leader of “Megacities and the Global Environment” in the Research Institute for Humanity and Nature (Kyoto, Japan) during 2009-2015. He obtained BSc in Engineering in 1978, MSc in Engineering in 1980, and Ph.D. in Engineering in 1988 (The University of Tokyo, Japan). He studied at Tsinghua University (Beijing, China) during 1981-1984.
Emeritus Professor/Dr. Terry McGee
He is an emeritus professor at British Columbia University (Canada). He is currently carrying ongoing research for a book on ‘The Southeast Asian City Revisited’ (tentative title) funded by research grants from the Institute of Asian Research UBC, research on the sustainability of Asian mega-regions funded by the University of Tokyo, and research on Malaysian urbanization with colleagues at the University Kebangsaan, Malaysia. He created his own model ‘McGee Model’ in 1967. He was awarded Vautrin Lud Prize in 2009. He earned a BA (The University of New Zealand), MA, and a Ph.D. in 1969 (The University of Wellington. (Beijing, China) during 1981-1984.
Professor/Dr. Koichiro Mori
He is a professor of economics at Shiga University (Japan). His interests are urban sustainability, the development of the city sustainability index, ecological-economic modelling, practical solutions promoting pro-environmental behaviour, and the SDGs in profit-seeking companies. He developed a city sustainability index (CSI) in the project in the Research Institute for Humanity and Nature (Kyoto, Japan), focusing on megacities. He got BA in Commerce and Business Administration in 1994 and MA in Commerce and Business Administration in 1996 (Hitotsubashi University, Japan). He received Ph.D. in Environmental Economics and Management in 2006 (The University of York, UK).