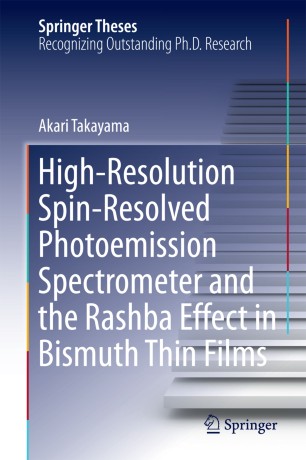 In this thesis, the author has developed a high-resolution spin-resolved photoemission spectrometer that achieves the world-best energy resolution of 8 meV. The author has designed a new, highly efficient mini Mott detector that has a large electron acceptance angle and an atomically flat gold target to enhance the efficiency of detecting scattered electrons.

The author measured the electron and spin structure of Bi thin film grown on a Si(111) surface to study the Rashba effect. Unlike the conventional Rashba splitting, an asymmetric in-plane spin polarization and a tremendous out-of-plane spin component were observed. Moreover, the author found that the spin polarization of Rashba surface states is reduced by decreasing the film thickness, which indicates the considerable interaction of Rashba spin-split states between the surface and Bi/Si interface.