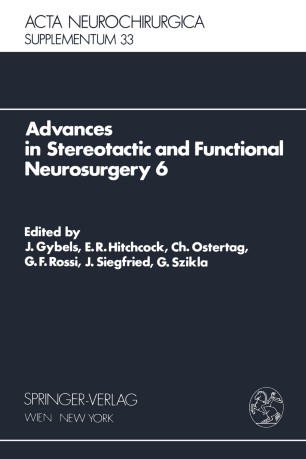 Advances in Stereotactic and Functional Neurosurgery 6

Proceedings of the 6th Meeting of the European Society for Stereotactic and Functional Neurosurgery, Rome 1983

Local interstitial radiation therapy of intrinsic and inaccessible brain tumors is confronted with two major problems: 1. The tolerance of normal brain tissue, which is usually involved in local tumor irradiation, i.e. perifocal white matter edema and demyelinating effects, is crucial. 2. Data on radiation effects of implanted radioactive sources on neoplastic tissue, i.e. data on the radiosensitivity and on the biology of tumors, are still widely unavailable. In clinical practice the dose with which to achieve a given volume of tumor necrosis is roughly estimated. This report deals with the experimental findings of Iodine-125 and Iridium-I92 permanent implants in healthy and neoplastic brain tissue. Our own experimental findings are correlated with experimental data on Yttnul11-l)O irradiation from the literature. The study is directed to collect data on the tolerance non-tumoral brain tissue and to attempt to establish a dose-response relationship. Morphologic Changes in the Dog Brain Following Interstitial Iodine-125 Irradiation Iodine-I25 seeds (manufactured by 3 M Company, St. Paul, M. N.) with an activity of 3.55 mCi were permanently implanted under stereotactic conditions into the subcortical white matter of the gyrus coronalis of the left hemisphere in 6 beagle dogs. One animal with a non-radioactive seed implanted under similar operative conditions served as a control. The animals were allowed to survive 25, 46, 71, 94, 248, 368 days, respectively, after the implantation. The control animal survived 46 days. A detailed description of the experimental procedure is given elsewhere 16. 17.