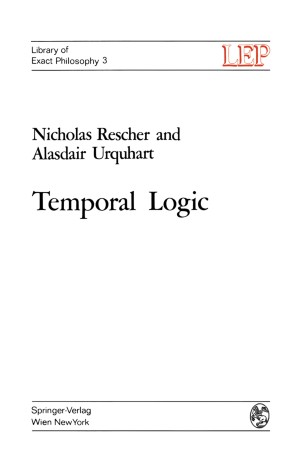 This book is an introduction to temporal logic, a now flourishing branch of philosophical logic whose origin is of recent date, its main impetus having been provided by the publication in the late 1950s of A. N. PRIOR'S pioneering book, Time and Modality (Oxford, The Clarendon Press, 1957). Virtually all work in the field to around 1966 is surveyed in PRIOR'S elegant treatise Past, Present and Future (Oxford, The Clarendon Press, 1967). In consequence, it is no simple matter to write a comprehensive book on the subject with­ out merely rehearsing material already dealt with in PRIOR'S works. We believe, however, that the present book succeeds in this difficult endeavor because it approaches established materials from wholly novel points of departure, and is thus able to attain new perspectives and achieve new results. Its introductory character notwithstanding, the present work is consequently in substantial measure devoted to an exposition of new findings and a demonstration of new results. Parts of the book have been published previously. Chapter II is a modified version of an article of the same title by N. RESCHER and JAMES GARSON in The Journal of Symbolic Logic (vol. 33 [1968], pp.537-548). And Chapter XIII is a modified version of the article "Temporally Conditioned Descriptions" by N. RESCHER and JOHN ROBISON in Ratio, vol. 8 (1966), pp. 46-54. The authors are grateful to Professors GARSON and ROBISON, and to the editors of the jounal involved, for their permission to use this materials here.