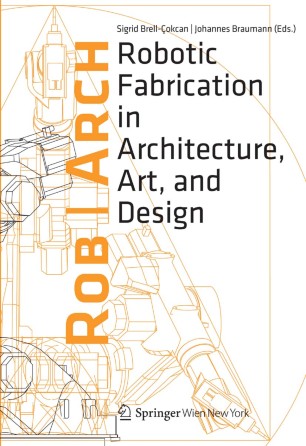 Architects, artists, and designers have been fascinated by robots for many decades, from Villemard’s utopian vision of an architect building a house with robotic labor in 1910, to the design of buildings that are robots themselves, such as Archigram’s Walking City. Today, they are again approaching the topic of robotic fabrication but this time employing a different strategy: instead of utopian proposals like Archigram’s or the highly specialized robots that were used by Japan’s construction industry in the 1990s, the current focus of architectural robotics is on industrial robots. These robotic arms have six degrees of freedom and are widely used in industry, especially for automotive production lines. What makes robotic arms so interesting for the creative industry is their multi-functionality: instead of having to develop specialized machines, a multifunctional robot arm can be equipped with a wide range of end-effectors, similar to a human hand using various tools. Therefore, architectural research into robotics is not so much directed at reinventing machines for architectural fabrication, but rather at reusing industrial robots as a well-established basis and adapting them for architectural purposes by developing custom software interfaces and end-effectors. By doing this, architects, artists and designers have advanced from being mere “users” of robots and have successfully emerged as recognized developers and trendsetters in robotic

This book publishes the proceedings of the fi rst international conference on robotic fabrication in architecture, art, and design, Rob|Arch.