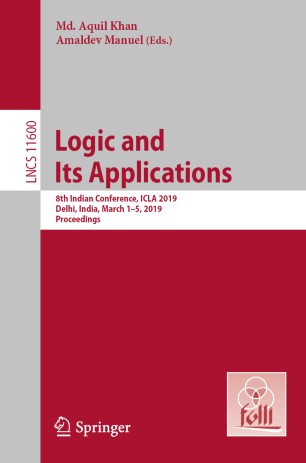 ICLA: Indian Conference on Logic and Its Applications

Logic and Its Applications

This book collects the refereed proceedings of the 8th Indian Conference on Logic and Its Applications, ICLA 2019, held in Delhi, India, in March 2019. The volume contains 13 full revised papers along with 6 invited talks presented at the conference.  The aim of this conference series is to bring together researchers from a wide variety of fields in which formal logic plays a significant role. Areas of interest include mathematical and philosophical logic, computer science logic, foundations and philosophy of mathematics and the sciences, use of formal logic in areas of theoretical computer science and artificial intelligence, logic and linguistics, and the relationship between logic and other branches of knowledge. Of special interest are studies in systems of logic in the Indian tradition, and historical research on logic.