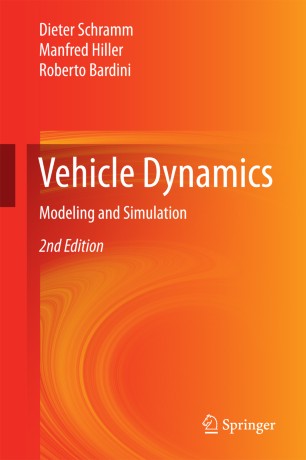 The authors examine in detail the fundamentals and mathematical descriptions of the dynamics of automobiles. In this context, different levels of complexity are presented, starting with basic single-track models up to complex three-dimensional multi-body models. A particular focus is on the process of establishing mathematical models based on real cars and the validation of simulation results. The methods presented are explained in detail by means of selected application scenarios.
In addition to some corrections, further application examples for standard driving maneuvers have been added for the present second edition. To take account of the increased use of driving simulators, both in research, and in industrial applications, a new section on the conception, implementation and application of driving simulators has been added.

Prof. Dr.-Ing. Dieter Schramm is the head of the Chair of Mechatronics since 2004 and the dean of the Faculty of Engineering at the University of Duisburg-Essen since 2006. Before that time and after he got his Phd in Engineering from the University of Stuttgart he worked over a period of more than 18 years in various positions in the Automotive Industry. Starting as section manager at the Robert Bosch Company he held later positions as head of department and from 1999 as director of engineering and marketing for various product segments and as well as being the CEO of an affiliated company of Tyco Electronics Ltd. His main scientific focus in automotive is on vehicle dynamics and safety, driver assistance systems, electro mobility and driving simulators.

Prof. Dr.-Ing. habil. Dr. H.C. Mult. M. Hiller has been head of the first Chair of Mechatronics in Germany from 1991 to 2004 at the University of Duisburg (today University of Duisburg-Essen). During his time in Duisburg (from 1987) and before that during his time at the University of Stuttgart he has been dealing with modeling and simulation of road vehicles over more than three decades. As a consequence, close collaborations with major car manufacturers and car suppliers in Germany have been established. In particular, detailed multi-body system based simulation models have been designed, thus providing a major contribution to the development of active and passive safety systems, like ESP and rollover-prevention.

Dr.-Ing. Roberto Bardini has been working since March 2000 as a development engineer in the field of vehicle safety, first with the company Audi and since October 2003 with the company BMW. He is engaged in spatial multi-body simulation of occupants and vehicles since his mechanical engineering degree in 1996 at the chair of mechatronics under direction of Professor Hiller. Especially for the design of occupant protection systems for vehicle rollover, he has developed simulation tools that are successfully used in practice.