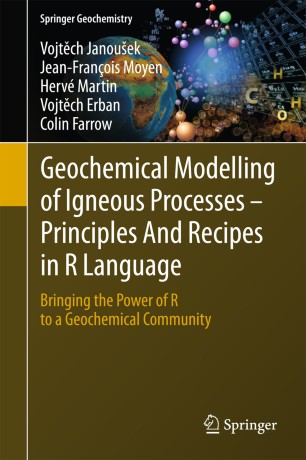 Bringing the Power of R to a Geochemical Community

The aim of this book is to unlock the power of the freeware R language to advanced university students and researchers dealing with whole-rock geochemistry of (meta-) igneous rocks. The first part covers data input/output, calculation of commonly used indexes and plotting in R. The core of the book then focusses on the presentation and practical implementations of modelling techniques used for fingerprinting processes such as partial melting, fractional crystallization, binary mixing or AFC using major-, trace-element and radiogenic isotope data. The reader will be given a firm theoretical basis for forward/reverse modelling, followed by exercises dealing with typical problems likely to be encountered in real life, and their solutions using R. The concluding sections demonstrate, using practical examples, how a researcher can proceed in developing a realistic model simulating natural systems. The appendices outline the fundamentals of the R language and provide a quick introduction to the open-source R-package GCDkit for Interpretation of whole-rock geochemical data from igneous and metamorphic rocks.

Vojtěch Janoušek (*1968) is associate professor at the Charles University in Prague, employed in the radiogenic isotopes laboratory of the Czech Geological Survey. He received a MSci from the Charles University and a PhD in geochemistry from the University of Glasgow. His research focusses on igneous geochemistry, geochronology and numerical modelling as well as computing in geosciences. He is editor-in-chief of open-access Journal of Geosciences.

Hervé Martin is Professor at the University Blaise Pascal in Clermont-Ferrand, France, where he works in the “Laboratoire Magmas et Volcans”. The research that he develops consists in modeling the geochemical behaviour of major and trace elements in order to constrain the petrogenesis of the Earth’s primitive continental crust, as well as magma genesis in modern subduction zones.

Vojtěch Erban is working at the Radiogenic Isotopes Laboratory of the Czech Geological Survey in Prague. His professional interests comprise geochemistry, isotope analytics and geochemical modelling.

Colin Farrow is an IT specialist and former member of the Department of Geology & Applied Geology, University of Glasgow with an interest in developing software for geological data analysis.

“It is a textbook which discusses the theory of geochemical modelling as applied to whole-rock major and trace element data and to radiogenic isotopes … . A starting graduate student in geochemistry would benefit from spending time with this book. It is well produced, the text is clear and the coding sections are printed in a different font for clarity, it is well illustrated with excellent diagrams, some of which are in colour, and each chapter is thoroughly referenced.” (Hugh Rollinson, Elements, elementsmagazine.org, June, 2016)
Buy options