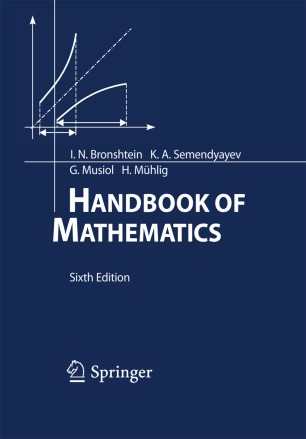 This guide book to mathematics contains in handbook form the fundamental working knowledge of mathematics which is needed as an everyday guide for working scientists and engineers, as well as for students. Easy to understand, and convenient to use, this guide book gives concisely the information necessary to evaluate most problems which occur in concrete applications. In the newer editions emphasis was laid on those fields of mathematics that became more important for the formulation and modeling of technical and natural processes, namely Numerical Mathematics, Probability Theory and Statistics, as well as Information Processing. Besides many enhancements and  new paragraphs,  new sections on Geometric and Coordinate Transformations, Quaternions and Applications, and Lie Groups and Lie Algebras were added for the sixth edition.

Gerhard Musiol received the Dipl.-Ing. degree for Physical Nuclear Technics in 1958 at the Technical University Dresden (TUD), the Doctorate degree in Physics in 1966 at the international ”Joint Institute of Nuclear Research“ (JINR) Dubna near Moscow/USSR and the University Lecturing Qualification at the TUD in 1970.
The Professorship with chair for Experimental Physics at the TUD Prof. Musiol has hold from 1969–1992 as chair of the Institute of Nuclear Physics and Automatization from 1970–1974 and as chair of the Institute of Applied Nuclear Physics from 1979–1992.
The most important teaching themes of Prof. Musiol concern Experimental Physics, Structure of Matter, Nuclear- and Elementary Particle Physics and Applied Nuclear Physics.
To the main directions of research belong 1. Spectrometric investigations of nuclei with short half-life at the 680-MeV-proton beam in the JINR, 2. Investigations of high-energetic atomic-ionization states inside of accelerated heavy ion rings at the collective accelerator of the JINR, 3. Investigations of processes and materials as well as control with nuclear radiations for industrial use (TUD) and 4. Absolute and precise determination of nuclearfission cross sections, important for nuclear energetics.
Most investigations have been performed in national or international co-operation.
In the years before entering into pension many effort Prof. Musiol spent for working in scientific bodies and commissions of experts at university-, national and international level.
The results of the investigations have been published together with co-authors in 49 publications in Scientific Journals with expert system, 33 in Scientific Journals without expert system and in 192 Research Reports.
There where well over 100 lectures at national and international conferences and continuation courses.
Prof. Musiol published co-authored 2 Text Books about Nuclear- and Elementary-Particle Physics and 3 Reference Books. One of the last is about ”Physical Effects and their Applications“(3rd. Ed. 2005). The other two co-editored together with H. M¨uhlig are the ”Handbook of Mathematics“ in German (1st – 9th Ed. 2003-2013) and in English (4th – 6th Ed., Springer 2003-2015).