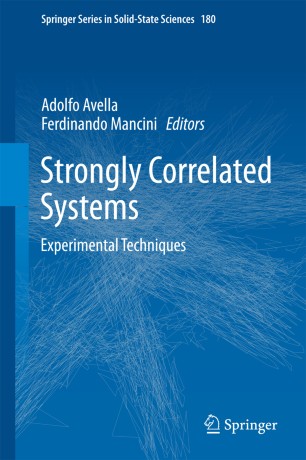 The continuous evolution and development of experimental techniques is at the basis of any fundamental achievement in modern physics. Strongly correlated systems (SCS), more than any other, need to be investigated through the greatest variety of experimental techniques in order to unveil and crosscheck the numerous and puzzling anomalous behaviors characterizing them. The study of SCS fostered the improvement of many old experimental techniques, but also the advent of many new ones just invented in order to analyze the complex behaviors of these systems. Many novel materials, with functional properties emerging from macroscopic quantum behaviors at the frontier of modern research in physics, chemistry and materials science, belong to this class of systems. The volume presents a representative collection of the modern experimental techniques specifically tailored for the analysis of strongly correlated systems. Any technique is presented in great detail by its own inventor or by one of the world-wide recognized main contributors. The exposition has a clear pedagogical cut and fully reports on the most relevant case study where the specific technique showed to be very successful in describing and enlightening the puzzling physics of a particular strongly correlated system. The book is intended for advanced graduate students and post-docs in the field as textbook and/or main reference, but also for any other researcher in the field who appreciates consulting a single, but comprehensive, source or wishes to get acquainted, in a as painless as possible way, with the working details of a specific technique.