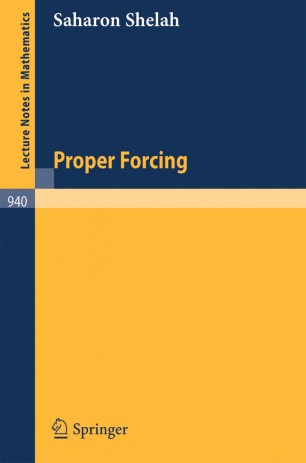 These notes can be viewed and used in several different ways, each has some justification, a collection of papers, a research monograph or a text book. The author has lectured variants of several of the chapters several times: in University of California, Berkeley, 1978, Ch. III , N, V in Ohio State Univer­ sity in Columbus, Ohio 1979, Ch. I,ll and in the Hebrew University 1979/80 Ch. I, II, III, V, and parts of VI. Moreover Azriel Levi, who has a much better name than the author in such matters, made notes from the lectures in the Hebrew University, rewrote them, and they ·are Chapters I, II and part of III , and were somewhat corrected and expanded by D. Drai, R. Grossberg and the author. Also most of XI §1-5 were lectured on and written up by Shai Ben David. Also our presentation is quite self-contained. We adopted an approach I heard from Baumgartner and may have been used by others: not proving that forcing work, rather take axiomatically that it does and go ahead to applying it. As a result we assume only knowledge of naive set theory (except some iso­ lated points later on in the book).