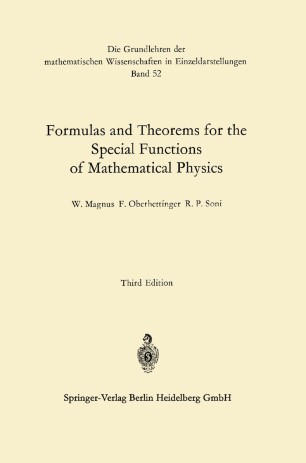 Formulas and Theorems for the Special Functions of Mathematical Physics

This is a new and enlarged English edition of the book which, under the title "Formeln und Satze fur die Speziellen Funktionen der mathe­ matischen Physik" appeared in German in 1946. Much of the material (part of it unpublished) did not appear in the earlier editions. We hope that these additions will be useful and yet not too numerous for the purpose of locating .with ease any particular result. Compared to the first two (German) editions a change has taken place as far as the list of references is concerned. They are generally restricted to books and monographs and accomodated at the end of each individual chapter. Occasional references to papers follow those results to which they apply. The authors felt a certain justification for this change. At the time of the appearance of the previous edition nearly twenty years ago much of the material was scattered over a number of single contributions. Since then most of it has been included in books and monographs with quite exhaustive bibliographies. For information about numerical tables the reader is referred to "Mathematics of Computation", a periodical publis­ hed by the American Mathematical Society; "Handbook of Mathe­ matical Functions" with formulas, graphs and mathematical tables National Bureau of Standards Applied Mathematics Series, 55, 1964, 1046 pp., Government Printing Office, Washington, D.C., and FLETCHER, MILLER, ROSENHEAD, Index of Mathematical Tables, Addison-Wesley, Reading, Mass.) .. There is a list of symbols and abbreviations at the end of the book.