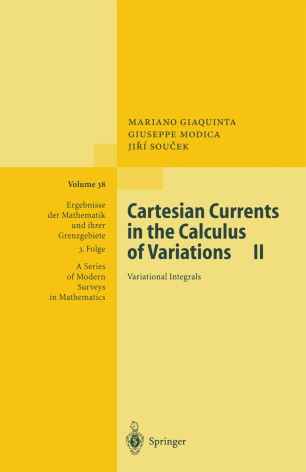 Cartesian Currents in the Calculus of Variations II

Non-scalar variational problems appear in different fields. In geometry, for in­ stance, we encounter the basic problems of harmonic maps between Riemannian manifolds and of minimal immersions; related questions appear in physics, for example in the classical theory of a-models. Non linear elasticity is another example in continuum mechanics, while Oseen-Frank theory of liquid crystals and Ginzburg-Landau theory of superconductivity require to treat variational problems in order to model quite complicated phenomena. Typically one is interested in finding energy minimizing representatives in homology or homotopy classes of maps, minimizers with prescribed topological singularities, topological charges, stable deformations i. e. minimizers in classes of diffeomorphisms or extremal fields. In the last two or three decades there has been growing interest, knowledge, and understanding of the general theory for this kind of problems, often referred to as geometric variational problems. Due to the lack of a regularity theory in the non scalar case, in contrast to the scalar one - or in other words to the occurrence of singularities in vector valued minimizers, often related with concentration phenomena for the energy density - and because of the particular relevance of those singularities for the problem being considered the question of singling out a weak formulation, or completely understanding the significance of various weak formulations becames non trivial.