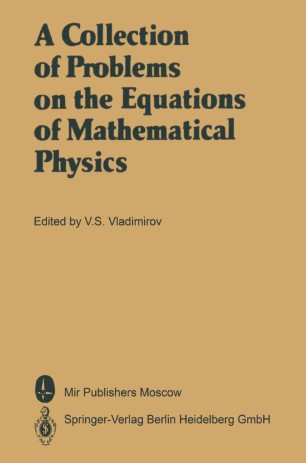 A Collection of Problems on the Equations of Mathematical Physics

The extensive application of modern mathematical teehniques to theoretical and mathematical physics requires a fresh approach to the course of equations of mathematical physics. This is especially true with regards to such a fundamental concept as the 80lution of a boundary value problem. The concept of a generalized solution considerably broadens the field of problems and enables solving from a unified position the most interesting problems that cannot be solved by applying elassical methods. To this end two new courses have been written at the Department of Higher Mathematics at the Moscow Physics anrl Technology Institute, namely, "Equations of Mathematical Physics" by V. S. Vladimirov and "Partial Differential Equations" by V. P. Mikhailov (both books have been translated into English by Mir Publishers, the first in 1984 and the second in 1978). The present collection of problems is based on these courses and amplifies them considerably. Besides the classical boundary value problems, we have ineluded a large number of boundary value problems that have only generalized solutions. Solution of these requires using the methods and results of various branches of modern analysis. For this reason we have ineluded problems in Lebesgue in­ tegration, problems involving function spaces (especially spaces of generalized differentiable functions) and generalized functions (with Fourier and Laplace transforms), and integral equations.