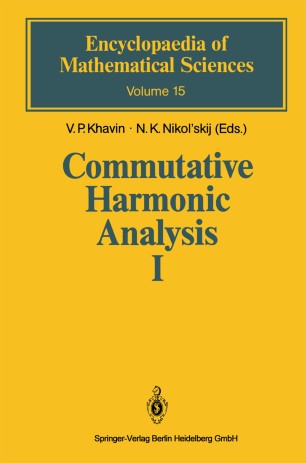 This volume is the first in the series devoted to the commutative harmonic analysis, a fundamental part of the contemporary mathematics. The fundamental nature of this subject, however, has been determined so long ago, that unlike in other volumes of this publication, we have to start with simple notions which have been in constant use in mathematics and physics. Planning the series as a whole, we have assumed that harmonic analysis is based on a small number of axioms, simply and clearly formulated in terms of group theory which illustrate its sources of ideas. However, our subject cannot be completely reduced to those axioms. This part of mathematics is so well developed and has so many different sides to it that no abstract scheme is able to cover its immense concreteness completely. In particular, it relates to an enormous stock of facts accumulated by the classical "trigonometric" harmonic analysis. Moreover, subjected to a general mathematical tendency of integration and diffusion of conventional intersubject borders, harmonic analysis, in its modem form, more and more rests on non-translation invariant constructions. For example, one ofthe most signifi­ cant achievements of latter decades, which has substantially changed the whole shape of harmonic analysis, is the penetration in this subject of subtle techniques of singular integral operators.