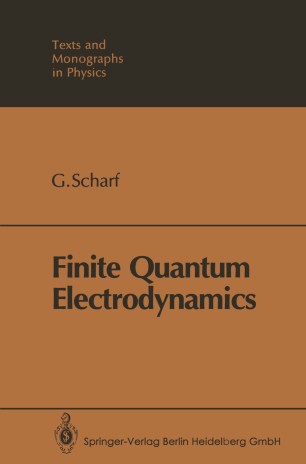 Part of the Theoretical and Mathematical in Physics book series (TMP)

In this book the author carefully analyses the role of the concept of causality in Quantum Electrodynamics. This approach makes it possible for the first time to publish a textbook on QED which not only includes full proofs and detailed calculations but is also mathematically rigorous. The book begins with Dirac's theory in part one, followed in part two by the quantum theory of free fields including a new approach to the concept of exterior fields. The third part is devoted to the study of the S-matrix of QED avoiding ultraviolet divergence. The most important physical results of QED are derived, and significant themes such as unitarity and renormalizability of the theory are discussed. This slim book addresses graduate students in physics. From the reviews: "In the summary on the back cover the unheard-of statement appears that now the first (mathematically) rigorous textbook on Quantum Electrodynamics was on hand. ... In fact, "Finite Quantum Electrodynamics" does justice to this claim. And, in addition, in a pregnant, lifely form. On 220 pages G. Scharf (Zurich) succeeds in presenting a concise description of QED ... As promised, only finite quantities appear ... In Russia I often feel frustrated that I studied Latin in school and Russian was not offered. Now I have the same feeling after reading Scharf's book. I studied the wrong grammar up to now." #Translated from a review by Thomas Schücker in Physik in unserer Zeit#1