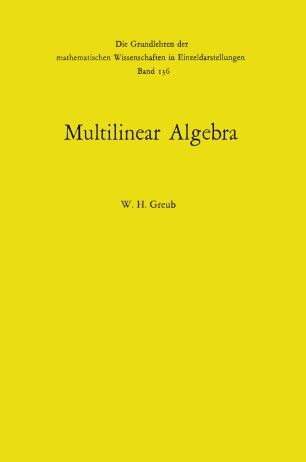 This book is built around the material on multilinear algebra which in chapters VI to IX of the second edition of Linear Algebra was included but exc1uded from the third edition. It is designed to be a sequel and companion volume to the third edition of Linear Algebra. In fact, the terminology and basic results of that book are frequently used without reference. In particular, the reader should be familiar with chapters I to V and the first part of chapter VI although other sections are occasionally used. The essential difference between the present treatment and that of the second edition lies in the full exploitation of universal properties which eliminates the restrietion to vector spaces of finite dimension. Chapter I contains standard material on multilinear mappings and the tensor product of vector spaces. These results are extended in Chapter 11 to vector spaces with additional structure, such as algebras and differ­ ential spaces. The fundamental concept of "tensor product" is used in Chapter 111 to construct the tensor algebra over a given vector space. In the next chapter the link is provided between tensor algebra on the one hand and exterior and symmetrie tensor algebra on the other. Chapter V contains material on exterior algebra which is developed in considerable depth. Exterior algebra techniques are used in the followmg chapter as a powerful tool to obtain matrix-free proofs of many classical theorems on linear transformation.