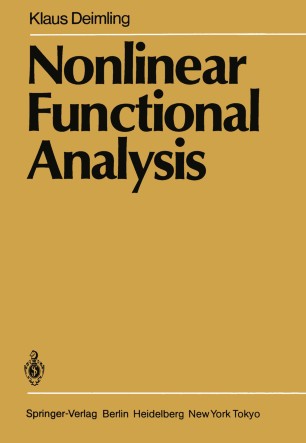 topics. However, only a modest preliminary knowledge is needed. In the first chapter, where we introduce an important topological concept, the so-called topological degree for continuous maps from subsets ofRn into Rn, you need not know anything about functional analysis. Starting with Chapter 2, where infinite dimensions first appear, one should be familiar with the essential step of consider­ ing a sequence or a function of some sort as a point in the corresponding vector space of all such sequences or functions, whenever this abstraction is worthwhile. One should also work out the things which are proved in § 7 and accept certain basic principles of linear functional analysis quoted there for easier references, until they are applied in later chapters. In other words, even the 'completely linear' sections which we have included for your convenience serve only as a vehicle for progress in nonlinearity. Another point that makes the text introductory is the use of an essentially uniform mathematical language and way of thinking, one which is no doubt familiar from elementary lectures in analysis that did not worry much about its connections with algebra and topology. Of course we shall use some elementary topological concepts, which may be new, but in fact only a few remarks here and there pertain to algebraic or differential topological concepts and methods.