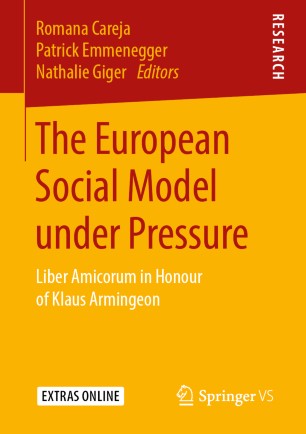 The European Social Model under Pressure

The European Social Model is at a crossroad. Although from the 1990s onwards, the threat of an imminent crisis shaped much of the rhetoric surrounding the future of the welfare state, disagreement within the academic community remains. What is however increasingly clear is that with the global financial crisis and the Euro crisis that followed it, the challenges the European Social Model faces have become more acute and demand action. This volume launches a multifaceted inquiry into these challenges. Each contribution, written by renowned scholars in their fields, represents an in-depth exploration of issues that cut to the core of current political, economic and social processes. They are an invitation to the seasoned scholars as well as to the beginning students of social sciences, public administration or journalism to engage with, by now, a large body of scholarship, to accompany the authors in their endeavours to seek an explanation to burning questions and start their own inquiries.
Contents
Target Groups
The Editors
Romana Careja is Associate Professor at the University of Southern Denmark.
Patrick Emmenegger is Professor at the University of St. Gallen.
Nathalie Giger is Associate Professor at the University of Geneva.