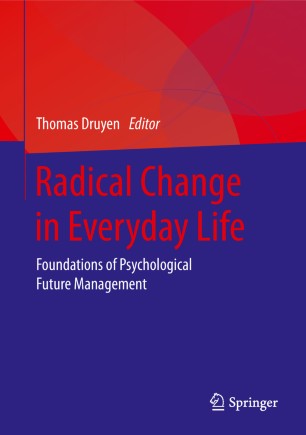 This volume deals with a key concept concerning the future: change. It is omnipresent and yet is often only perceived in retrospect. The book’s editor and founder of Psychological Future Management argues that we are currently experiencing the beginning of the most radical and profound change in human history. This is the right moment to analyze people’s ability to change more precisely. In this first, representative study, Germany was chosen as an example. The results serve as a basis for further psychological, sociological and prospective considerations.
The Germans obviously have great resilience and problem-solving competence. At the same time, however, they are one-sidedly fixated on maintaining the economic status quo and fear negative changes in the future. Their social milieus are permeated by contradictions. The wealthy, in particular, are tied to security concerns and are therefore unwilling to experiment and take risks, two qualities without which a future in times of exponential change can hardly be managed. What could other countries and societies learn from these descriptions of the current state of one of the world’s leading countries? The entire subject revolves around this question.
The psychological effects of digitization and artificial intelligence also play a role, as they put our neuronal and emotional habits under enormous pressure. How can we improve our future competence and learn to adapt new knowledge more quickly and continuously?  Against this background, the phenomenon of change will be examined and discussed from various national and international perspectives.
The target groups
The editor
Prof. Dr. Thomas Druyen is the director and founder of the IZZ Institute for Psychological Future Management and the IVV Institute for Wealth Psychology and Wealthibility at Sigmund Freud University in Vienna.