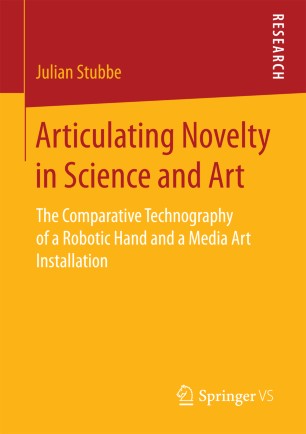 Articulating Novelty in Science and Art

Julian Stubbe aims at characterizing what novelty is in the becoming of objects and how the new becomes part of a shared reality. The study’s method is comparative and concerned with technological practice in science as well as in art. It draws on a detailed comparison of two cases: the becoming of a robotic hand made from silicon, and the genesis of a media art installation that renders visible changes in the earth’s magnetic field. In contrast to the canon of sociological innovation studies, which regard novelty as what actors in the field label as new or innovation, the author attempts to delineate certain shifts in an object’s becoming that individuate an object and render its difference visible. This entails attending the enactment of novelty through cultural imaginaries and narratives about technologies, as well as acknowledging the shifts in technical forms that make loose elements enter a new kind of circularity. From this perspective, novelty is an articulation: when differences are not contradicting, but when differing characteristics are aligned, fitted, and click in so as to appear and behave as a distinct entity.
Contents
• Novelty and technological objects
• Three articulations of novelty: identity, form, and difference
• The aesthetic reflexivity of material practice
Target Groups
• Lecturers and students of sociology, especially of sociology of technology
The Author
Dr. Julian Stubbe currently works as scientific consultant in the field of demographic change and future research.