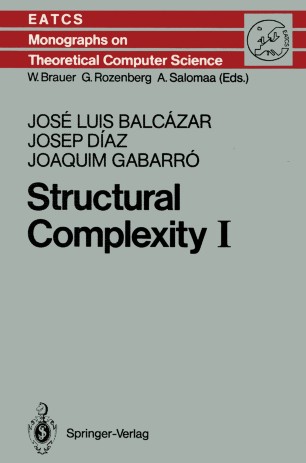 Since the achievement of a fonnal definition of the concept of "algorithm", the Mathematical Theory of Computation has developed into a broad and rich discipline. The notion of "complexity of an algorithm" yields an important area of research, known as Complexity Theory, that can be approached from several points of view. Some of these are briefly discussed in the Introduction and, in particular, our view of the "Structural" approach is outlined there. We feel the subject is mature enough to permit collecting and interrelating many of the results in book fonn. Let us point out that a substantial part of the knowledge in Structural Complexity Theory can be found only in specialized journals, symposia proceedings, and monographs like doctoral dissertations or similar texts, mostly unpublished. We believe that a task to be done soon is a systematization of the interconnections between all the research lines; this is a serious and long task. We hope that the two volumes of this book can serve as a starting point for this systematization process.