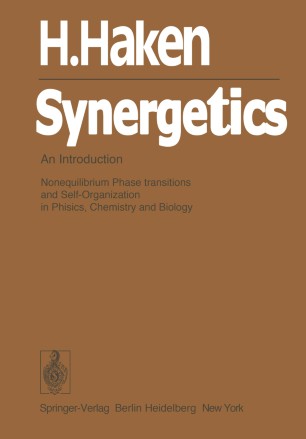 An Introduction Nonequilibrium Phase Transitions and Self- Organization in Physics, Chemistry and Biology

The spontaneous formation of well organized structures out of germs or even out of chaos is one of the most fascinating phenomena and most challenging problems scientists are confronted with. Such phenomena are an experience of our daily life when we observe the growth of plants and animals. Thinking of much larger time scales, scientists are led into the problems of evolution, and, ultimately, of the origin of living matter. When we try to explain or understand in some sense these extremely complex biological phenomena it is a natural question, whether pro­ cesses of self-organization may be found in much simpler systems of the un­ animated world. In recent years it has become more and more evident that there exist numerous examples in physical and chemical systems where well organized spatial, temporal, or spatio-temporal structures arise out of chaotic states. Furthermore, as in living of these systems can be maintained only by a flux of organisms, the functioning energy (and matter) through them. In contrast to man-made machines, which are to exhibit special structures and functionings, these structures develop spon­ devised It came as a surprise to many scientists that taneously-they are self-organizing. numerous such systems show striking similarities in their behavior when passing from the disordered to the ordered state. This strongly indicates that the function­ of such systems obeys the same basic principles. In our book we wish to explain ing such basic principles and underlying conceptions and to present the mathematical tools to cope with them.