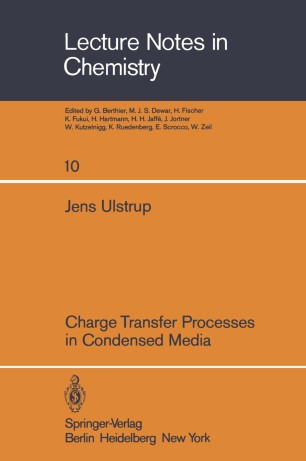 Molecules in liquid and solid media are exposed to strong inter­ action forces from the surrounding medium. The formulation of a comprehensive theory of chemical processes in condensed media is consequently an elaborate task involving concepts from several areas of the natural sciences. Within the las~ two and a half decades very notable results towards the formulation of a 'unified' quantum mechanical theory of such processes have in fact been achieved, and by the variety of physical, chemical, and biological processes which can be suitably covered by this framework, the new theory represents an adequate alternative to the transition state theory. The present work has a two-fold purpose. Firstly, to provide a reasonably organized exposition of some basic aspects of these developments. This part emphasizes the fundamental similarities between chemical and other kinds of radiationless processes and includes the derivation of the most important rate expressions without resorting to involved mathematical techniques. The s- ond major purpose is to illustrate the 'unified' character of the rate theory by analysis of a considerable amount of expe- mental data from both 'conventional' kinetics and from such untraditional areas as low-temperature, strongly exothermic, and biological processes. Particular attention is here given to those systems for which a classical description is inadequate, and which provide a diagnostic distinction between several alternative theoretical approaches.