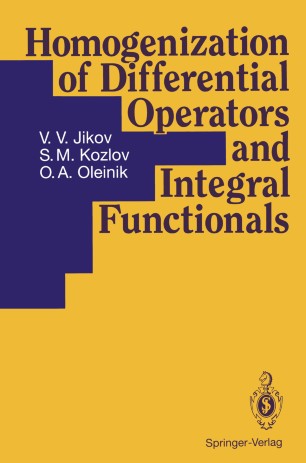 It was mainly during the last two decades that the theory of homogenization or averaging of partial differential equations took shape as a distinct mathe­ matical discipline. This theory has a lot of important applications in mechanics of composite and perforated materials, filtration, disperse media, and in many other branches of physics, mechanics and modern technology. There is a vast literature on the subject. The term averaging has been usually associated with the methods of non­ linear mechanics and ordinary differential equations developed in the works of Poincare, Van Der Pol, Krylov, Bogoliubov, etc. For a long time, after the works of Maxwell and Rayleigh, homogeniza­ tion problems for· partial differential equations were being mostly considered by specialists in physics and mechanics, and were staying beyond the scope of mathematicians. A great deal of attention was given to the so called disperse media, which, in the simplest case, are two-phase media formed by the main homogeneous material containing small foreign particles (grains, inclusions). Such two-phase bodies, whose size is considerably larger than that of each sep­ arate inclusion, have been discovered to possess stable physical properties (such as heat transfer, electric conductivity, etc.) which differ from those of the con­ stituent phases. For this reason, the word homogenized, or effective, is used in relation to these characteristics. An enormous number of results, approximation formulas, and estimates have been obtained in connection with such problems as electromagnetic wave scattering on small particles, effective heat transfer in two-phase media, etc.