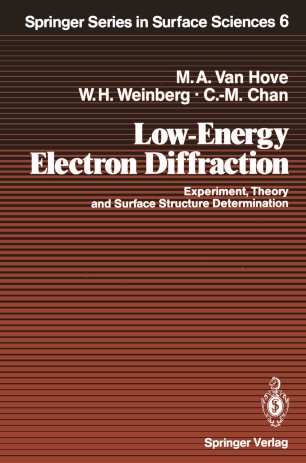 Surface crystallography plays the same fundamental role in surface science which bulk crystallography has played so successfully in solid-state physics and chemistry. The atomic-scale structure is one of the most important aspects in the understanding of the behavior of surfaces in such widely diverse fields as heterogeneous catalysis, microelectronics, adhesion, lubrication, cor­ rosion, coatings, and solid-solid and solid-liquid interfaces. Low-Energy Electron Diffraction or LEED has become the prime tech­ nique used to determine atomic locations at surfaces. On one hand, LEED has yielded the most numerous and complete structural results to date (almost 200 structures), while on the other, LEED has been regarded as the "technique to beat" by a variety of other surface crystallographic methods, such as photoemission, SEXAFS, ion scattering and atomic diffraction. Although these other approaches have had impressive successes, LEED has remained the most productive technique and has shown the most versatility of application: from adsorbed rare gases, to reconstructed surfaces of sem­ iconductors and metals, to molecules adsorbed on metals. However, these statements should not be viewed as excessively dogmatic since all surface­ sensitive techniques retain untapped potentials that will undoubtedly be explored and exploited. Moreover, surface science remains a multi-technique endeavor. In particular, LEED never has been and never will be self­ sufficient. LEED has evolved considerably and, in fact, has reached a watershed.