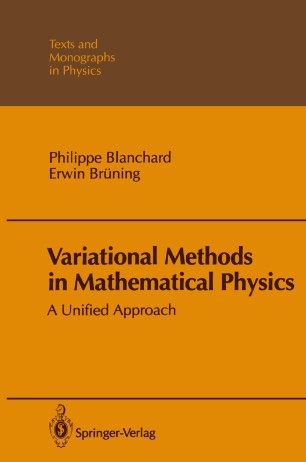 The first edition (in German) had the prevailing character of a textbook owing to the choice of material and the manner of its presentation. This second (translated, revised, and extended) edition, however, includes in its new parts considerably more recent and advanced results and thus goes partially beyond the textbook level. We should emphasize here that the primary intentions of this book are to provide (so far as possible given the restrictions of space) a selfcontained presentation of some modern developments in the direct methods of the cal­ culus of variations in applied mathematics and mathematical physics from a unified point of view and to link it to the traditional approach. These modern developments are, according to our background and interests: (i) Thomas-Fermi theory and related theories, and (ii) global systems of semilinear elliptic partial-differential equations and the existence of weak solutions and their regularity. Although the direct method in the calculus of variations can naturally be considered part of nonlinear functional analysis, we have not tried to present our material in this way. Some recent books on nonlinear functional analysis in this spirit are those by K. Deimling (Nonlinear Functional Analysis, Springer, Berlin Heidelberg 1985) and E. Zeidler (Nonlinear Functional Analysis and Its Applications, Vols. 1-4; Springer, New York 1986-1990).