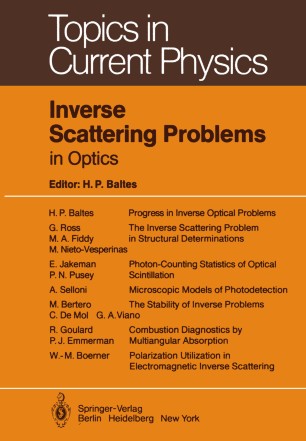 When, in the spring of 1979, H.P. Baltes presented me with the precursor of this vo 1 ume, the book on "Inverse Source Problems in Opti cs", I expressed my gratitude in a short note, 11hich in translation, reads: "Dear Dr. Ba ltes, the mere titl e of your unexpected gift evokes memori es of a period, which, in the terminology of your own contribution, would be described as the Stone Age of the Inverse Problem. Those were pleasant times. Walter Kohn and I lived in a cave by ourselves, drew pictures on the walls, and nobody seemed to care. Now, however, Inversion has become an Industry, which I contemplate with as much bewilderment as a surviving Tasmanian aborigine gazing at a modern oil refinery with its towers, its fl ares, and the confus i ng maze of its tubes." The present volume makes me feel even more aboriginal - impossible for me to fathom its content. What I can point out, however, is one of the forgotten origins of the Inverse Scattering Problem of Quantum Mechanics: Werner Heisenberg's "S-Matrix Theory" of 1943. This grandiose scheme had the purpose of eliminating the notion of the Hamiltonian in favour of the scattering operator. If Successful, it would have done away once and for all with any kind of inverse problem.