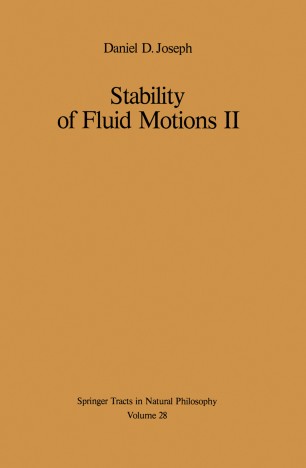 The study of stability aims at understanding the abrupt changes which are observed in fluid motions as the external parameters are varied. It is a demanding study, far from full grown, whose most interesting conclusions are recent. I have written a detailed account of those parts of the recent theory which I regard as established. Acknowledgements I started writing this book in 1967 at the invitation of Clifford Truesdell. It was to be a short work on the energy theory of stability and if I had stuck to that I would have finished the writing many years ago. The theory of stability has developed so rapidly since 1967 that the book I might then have written would now have a much too limited scope. I am grateful to Truesdell, not so much for the invitation to spend endless hours of writing and erasing, but for the generous way he has supported my efforts and encouraged me to higher standards of good work. I have tried to follow Truesdell's advice to write this work in a clear and uncomplicated style. This is not easy advice for a former sociologist to follow; if I have failed it is not due to a lack of urging by him or trying by me. My research during the years 1969-1970 was supported in part by a grant from the Guggenheim foundation to study in London.