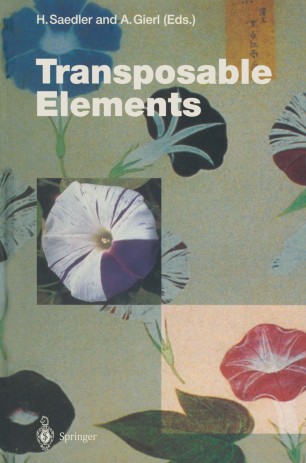 Most genes are lined up on chromosomes like pearls on a string. However, a certain class of genes differ by being highly mobile; and the mecha­ they are termed transposons. Their properties of transposition will be described in this book. nism is the rule, irregularities like a spot on a Where uniformity plain-coloured surface strike the eye. Thus the phenomenon of has long been a source of fascina­ variegation among organisms In plants, variegation is most easily recognised as irregulari­ tion. in pigment patterns on leaves, flowers and seeds, but other ties as leaf or flower form might also show characteristics such In 1588, such a variegation pattern was described in variegation. kernels of Zea mays by Jacob Theodor of Bergzabern, a village is so detailed that if south of Strasbourg. The report by Theodor one counts the different kernel phenotypes described it be­ is looking at a Mendelian segrega­ comes clear that the author had tion. It goes without saying that Latin-American Indians already bred such variegated material much earlier, but no descriptions have yet been uncovered. Meanwhile, genetically heritable variegation patterns have been described at many different loci in more than 34 different plant species.