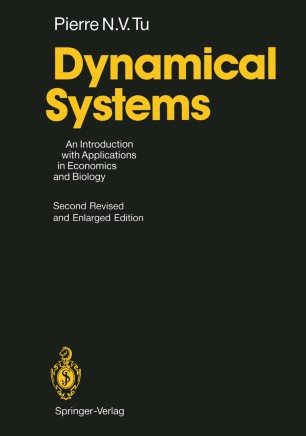 An Introduction with Applications in Economics and Biology

The favourable reception of the first edition and the encouragement received from many readers have prompted the author to bring out this new edition. This provides the opportunity for correcting a number of errors, typographical and others, contained in the first edition and making further improvements. This second edition has a new chapter on simplifying Dynamical Systems covering Poincare map, Floquet theory, Centre Manifold Theorems, normal forms of dynamical systems, elimination of passive coordinates and Liapunov-Schmidt reduction theory. It would provide a gradual transition to the study of Bifurcation, Chaos and Catastrophe in Chapter 10. Apart from this, most others - in fact all except the first three and last chapters - have been revised and enlarged to bring in some new materials, elaborate some others, especially those sections which many readers felt were rather too concise in the first edition, by providing more explana­ tion, examples and applications. Chapter 11 provides some good examples of this. Another example may be found in Chapter 4 where the review of Linear Algebra has been enlarged to incorporate further materials needed in this edition, for example the last section on idempotent matrices and projection would prove very useful to follow Liapunov-Schmidt reduction theory presented in Chapter 9.

"This book is the most useful recent review of differential equation systems that I have seen. The exposition is clear, explicit and accurate. It strikes an effective balance between rigor and readability, arguing proofs for the simpler cases, but citing publications for the more complex." The Quarterly Review of Biology
Buy options