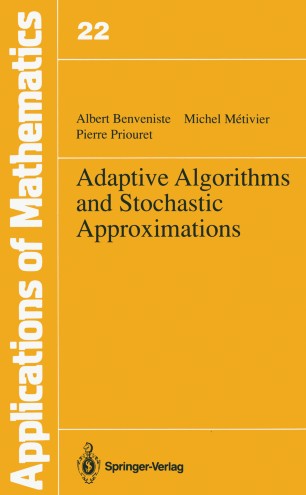 Part of the Applications of Mathematics book series (SMAP, volume 22)

Adaptive systems are widely encountered in many applications ranging through adaptive filtering and more generally adaptive signal processing, systems identification and adaptive control, to pattern recognition and machine intelligence: adaptation is now recognised as keystone of "intelligence" within computerised systems. These diverse areas echo the classes of models which conveniently describe each corresponding system. Thus although there can hardly be a "general theory of adaptive systems" encompassing both the modelling task and the design of the adaptation procedure, nevertheless, these diverse issues have a major common component: namely the use of adaptive algorithms, also known as stochastic approximations in the mathematical statistics literature, that is to say the adaptation procedure (once all modelling problems have been resolved). The juxtaposition of these two expressions in the title reflects the ambition of the authors to produce a reference work, both for engineers who use these adaptive algorithms and for probabilists or statisticians who would like to study stochastic approximations in terms of problems arising from real applications. Hence the book is organised in two parts, the first one user-oriented, and the second providing the mathematical foundations to support the practice described in the first part. The book covers the topcis of convergence, convergence rate, permanent adaptation and tracking, change detection, and is illustrated by various realistic applications originating from these areas of applications.