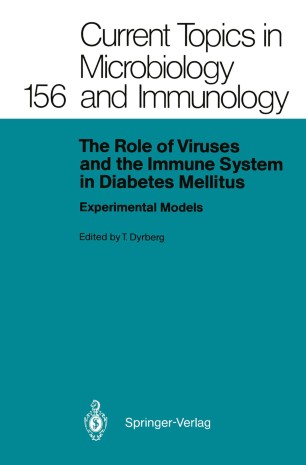 The Role of Viruses and the Immune System in Diabetes Mellitus

Research in diabetes has accelerated in two areas, both of which are being reviewed in CTMI. The first is the use of a variety of animal models; the second is basic research in human investigation, islet cell antigens, and mapping of genes as­ sociated with susceptibility to disease. Dr. Thomas Dyrberg accepted editorial responsibility for this volume, which covers the first area. A second book, to be published later in the year, is edited by Drs. Brekkeskov and Hansen (CTMI 164, see page VI for contents). Although the contributors to both volumes represent the international scientific community, the editors are from the Hagedorn Research Laboratory in Denmark. Work at this institute and the Steno Memorial Hospital has been dedicated to research in diabetes for decades, and the insti­ tutions were appointed WHO Collaborating Centres for Re­ search and Training on the Pathogenesis of Diabetes Mellitus in 1983. It is worth noting that while addressing the hypothesis of the role of class II major histocompatibility glycoproteins in autoimmune diabetes (insulin-dependent diabetes, IDDM) a number of investigators established animal models in which class II molecules were expressed under the control of the rat insulin promoter. While generating interesting information on 100M, the finding of immunologic tolerance in such transgenic mice has attracted the attention of several basic immunologic laboratories for quite different reasons. Thus, we are reminded again of the Pasteur dictum that "chance favors the prepared mind. " Michael B. A. Oldstone, M. D.