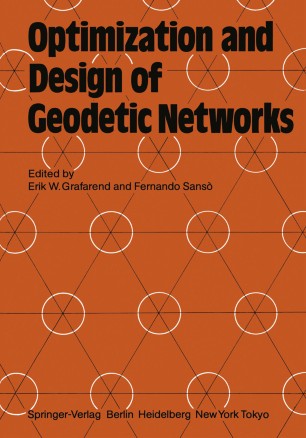 Optimization and Design of Geodetic Networks

During the period April 25th to May 10th, 1984 the 3rd Course of the International School of Advanced Geodesy entitled "Optimization and Design of Geodetic Networks" took place in Erice. The main subject of the course is clear from the title and consisted mainly of that particular branch of network analysis, which results from applying general concepts of mathematical optimization to the design of geodetic networks. As al­ ways when dealing with optimization problems, there is an a-priori choice of the risk (or gain) function which should be minimized (or maximized) according to the specific interest of the "designer", which might be either of a scientific or of an economic nature or even of both. These aspects have been reviewed in an intro­ ductory lecture in which the particular needs arising in a geodetic context and their analytical representations are examined. Subsequently the main body of the optimization problem, which has been conven­ tionally divided into zero, first, second and third order design problems, is presented. The zero order design deals with the estimability problem, in other words with the definition of which parameters are estimable from a given set of observa­ tions. The problem results from the fact that coordinates of points are not univocally determined from the observations of relative quantities such as angles and distances, whence a problem of the optimal choice of a reference system, the so-called "datum problem" arises.