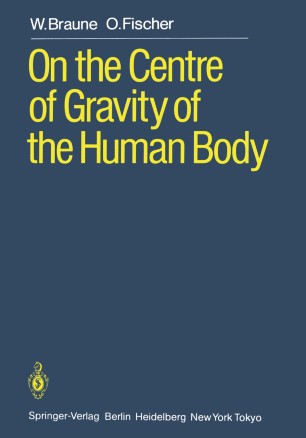 On the Centre of Gravity of the Human Body

as Related to the Equipment of the German Infantry Soldier

It is matter of some surprise that this treasury of information concerning the centres of gravity of various parts of the human body has remained hidden not only from the English speaking world for obvious reasons, but also to some degree from the Ger­ mans themselves. What is less surprising is t!1at this work is a monument to the renouned German thoroughness as demon­ strated by the relentless pursuit of data and the meticulous ac­ curacy of the conclusions. However, these scientific investigations carried out in Leipzig must be viewed in the intellectual climate of the time. In the lat­ ter half of the nineteenth century, and later, Germany underwent an intellectual explosion. It was the age of Rhumkorff, Max Planck, the Weber brothers and Gottingen University. It was said that science came to life during discussions on the train be­ tween Gottingen and Berlin. So the scene was set and Braune and Fischer made good use of it and fulfilled their role as mem­ bers of the Royal Scientific Society of Saxony. When Pauwels (1935) analysed the static and dynamic forces exerted on the hip joint when standing and when walking, he needed data concerning the centres of gravity of the human body and of its different segments. I was faced with the same pre­ requisite when I studied the forces acting on the knee (1976).