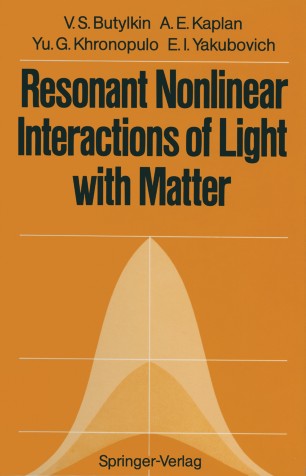 This book is devoted primarily to the various kinds of resonant nonlinear in­ teractions of light with two-level (or, in many cases, multilevel) systems. The interactions can involve one-photon as well as multiphoton processes in which some combinations of frequencies of participating photons are close to tran­ sitions of atoms or molecules (e.g., we consider stimulated Raman scattering (SRS) as a resonant interaction). This approach involves a broad spectrum of problems. Discussion of some of the basic phenomena as well as the pertinent theory could be found, for instance, in such well-known books as the ones due to N. Bloembergen; S.A. Akhmanov and R.V. Khokhlov; L. Allen and J.H. Eberly, and to V.M. Fain and Ya.1. Khanin. The book "Quantum Electronics" by A. Yariv could serve as an introductory guide to the subject. Thus, some of the basic material in the present book will already be well known to the reader who is an expert in the field. There are, for instance, general density matrix equations; two-level model and basic effects associated with this model, such as saturation of one-photon absorption and Raby oscillations; some basic multiphoton processes such as two-photon absorption, SRS, etc.