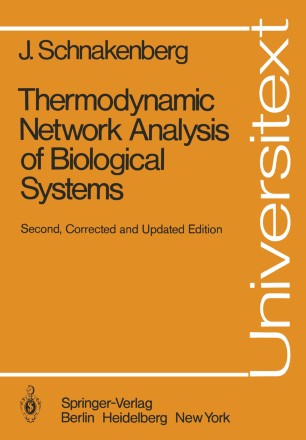 The first edition of this book was greeted with broad interest from readers en­ gaged in various disciplines of biophysics. I received many stimulating and en­ couraging responses, however, some of the book's reviewers wanted to stress the fact that an extensive literature of network theory was not included or reported in the book. But the main aspect of the book is intended to be substantive rather than methodical: networks simply serve as a remedy for doing some first steps in analysing and modelling complex biological systems. For an advanced stage in the investigation of a particular system it may be appropriate to replace the pheno­ menological network method by more detailed techniques like statistical equations or computer simulations. According to this intention, the second edition of the book has been enlarged by further biological examples for network analysis, not by more network theory. There is a completely new section on a network model for photoreception. For this section I am obliged to J. Tiedge who did most of the detailed calculation and to my colleague Professor Stieve with whom we have had a very fruitful cooperation. Also I would like to mention that this work has been sponsored by the "Deutsche Forschungsgemei nschaft" i n the "Sonderforschungsberei ch 160". Recent results for excitable systems represented by feedback networks have also been included in the second edition, especially for limit cycle networks.