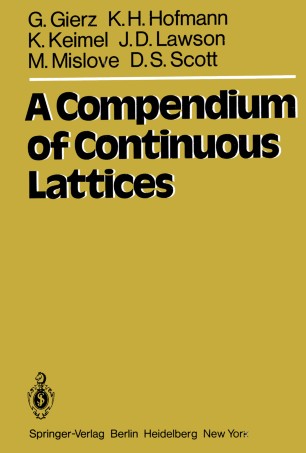 A mathematics book with six authors is perhaps a rare enough occurrence to make a reader ask how such a collaboration came about. We begin, therefore, with a few words on how we were brought to the subject over a ten-year period, during part of which time we did not all know each other. We do not intend to write here the history of continuous lattices but rather to explain our own personal involvement. History in a more proper sense is provided by the bibliography and the notes following the sections of the book, as well as by many remarks in the text. A coherent discussion of the content and motivation of the whole study is reserved for the introduction. In October of 1969 Dana Scott was lead by problems of semantics for computer languages to consider more closely partially ordered structures of function spaces. The idea of using partial orderings to correspond to spaces of partially defined functions and functionals had appeared several times earlier in recursive function theory; however, there had not been very sustained interest in structures of continuous functionals. These were the ones Scott saw that he needed. His first insight was to see that - in more modern terminology - the category of algebraic lattices and the (so-called) Scott-continuous functions is cartesian closed.